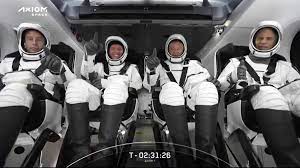 The first all-private mission to the International Space Station has launched, with four astronauts departing from Earth (ISS). The four men are referred to as the Axiom-1 crew. Axiom is a commercial spaceflight business that plans to launch its own space station in the next years. The First all-private mission has become an achievement for them.

At 11:17 a.m. local time, the crew launched on a SpaceX Falcon rocket from Florida’s Kennedy Space Center (15:17 GMT). The Endeavour capsule is scheduled to dock at the station on Saturday.

Michael López-Alegra, a former NASA astronaut, is in command of the mission. Larry Connor, a real estate developer and aerobatic pilot from the United States, is flying beside him, as is Eytan Stibbe, an Israeli investor and philanthropist, and Mark Pathy, a Canadian entrepreneur, investor, and philanthropist.

Axiom Space was created in 2016 to capitalise on the expanding market for commercial operations in low Earth orbit (LEO), which includes anything from tourism to manufacturing.

The company is planning a series of trips to the International Space Station. Axiom-2, the second one, will take happen either later this year or in early 2023. This will involve a crew member recruited from a reality television show.

The business has a deal with Nasa to put its own modules on the ISS‘s American segment. The plan is for these modules to sprout on their own and become a completely privatised LEO destination right before the ISS is abandoned.