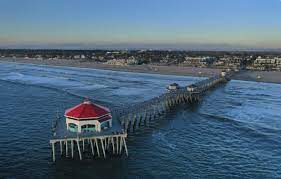 According to police, a coyote attacked and seriously injured a girl at the famous Huntington Beach in Southern California.  Officers were called to the beach near  Huntington Beach Pier at around 9:45 pm. Police spokeswoman Jennifer Carrie said in a statement Thursday.

“On arrival, police officers found the girl injured. The child was taken to a local hospital that was seriously injured but not life-threatening.”  Police are working with California wildlife authorities to track down the coyote and euthanize her, Carrie said.

Carey said police have conducted increased coyote trapping efforts throughout the city for the past several weeks and asked residents to report coyote sightings.

Huntington Beach, on the Orange County coast, has one of California’s classic surf breaks and is known as “Surf City USA.”  No other information about the girl will be released because she is a juvenile, Carey said.