HomeEntertainmentSana Khan remembers her day of marriage in a throwback video from...
EntertainmentBollywoodCelebsLife

Sana Khan remembers her day of marriage in a throwback video from a month ago with Anas Saiyad. 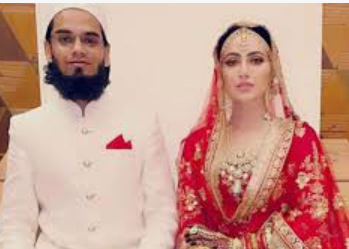 With a multitude of people getting married this year there were a few well known celebs also that tied the knots with their loved ones like Neha Kakkar, Sana Khan.

Actress Sana khan got married a month ago to Anas Saiyad in a private ceremony. The actress is a well known artist for her films like Jai ho, Wajah tum ho, Toilet- Ek Prem Katha and was also a contestant on Bigg Boss s6.

She married Anas and recently left her fans in an aww by sharing a intimate video from her wedding saying that it was one of her best decisions and that she prays that they spend the rest of their life happily. After the marriage she made a social media announcement stating that the two loved for the safe of Allah, got married for the sake of Allah and that they wish that Allah will keep them united in the world and also united them in Jannah.

Sana left the industry to follow the principles and path laid by her god and walk on them and serve the human race. After their marriage the couple took off to Kashmir for a romantic honeymoon and kept their fans update about their married life with stories, pictures and videos on their gram.

When confronted in an interview Anas mentioned that he had nothing to do with the actress giving up her career nor would he ever force her to do so it was solely her choice and decision and he supports it. He also mentioned that he doesn’t want he to lead a certain life for his sake.

The industry and the people of this industry would do anything in the name of a publicity stunt and attention seeking which is also suspected to be the reason why Sana started wearing hijab which she also announced on her gram.

Everyone knows if you don’t have a godfather in the industry or a known you cannot survive and it is very hard to keep up and get in with the mainstream stars and directors and producers and with the pandemic it became even more difficult for the actors and actresses to find work which is another supposed reason for Sana leaving the industry but her husband denies it and says that she had been thinking about it for quite sometime now and had always wanted to detach herself from the industry to giver herself sometime and invest in herself.