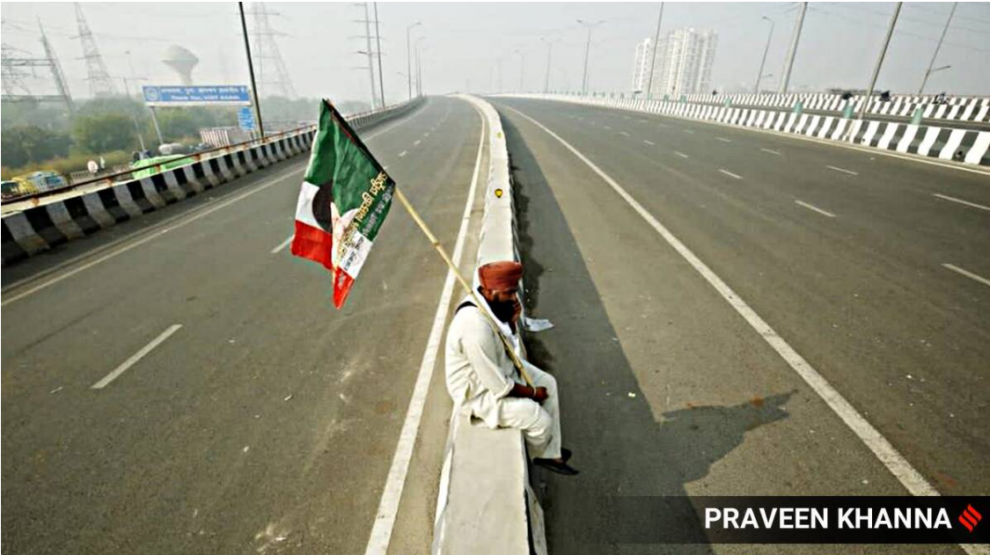 Farmers protesting against the recently passed farm laws have called for a peaceful “Bharat Bandh”, on December 8, just a day after their meeting with the central government for the 6th time. Farmers’ laid emphasis on the fact that no space would be given to any political party and said their protest is “peaceful and will continue that way”. Farmers urged people to extend their support non-violently and said their protest was not meant to “cause problems for the common man”. “Tomorrow’s Bharat Bandh is from 11 am to 3 pm. It is a symbolic protest. We will begin at 11 am so everyone can reach office on time… Services such as ambulance, even weddings, can go on. People can show their card and leave,” Bharatiya Kisan Union Spokesperson Rakesh Tikait said. According to the Delhi Traffic Police, borders along Singhu, Auchandi, Piao Maniyari, Mangesh borders are closed. NH-44 is closed on both sides. The Chilla border on Noida link road is closed from Noida to Delhi. The Gazipur border on NH-24 is closed for traffic from Ghaziabad to Delhi. “Avoid Outer Ring Rd, GT Karnal road,” the Delhi Traffic police tweeted suggesting alternative routes.

In Delhi, fruits and vegetables could be in short supply. “Most of our traders are supporting the Bharat Bandh call. Hence, mandis at Ghazipur, Okhla and Narela will be heavily impacted,” said Adil Ahmed Khan, Chairman of the Azadpur Mandi – Asia’s largest wholesale market. The farmers, mainly from Punjab, Haryana, and Uttar Pradesh who have been protesting at Singhu border near Delhi for the last 12 days, will block key roads during their ‘chakka jam’ protest from 11 am to 3 pm as part of their stir. The central government however is going to provide tight security and urged to follow strict covid-19 guildelines.

“There will be complete ‘Bharat bandh’ till 3 pm Tuesday, but emergency services will be allowed,” farmer leader Balbir Singh Rajewal told reporters. Rajewal reiterated the farmers’ stand, saying they will not accept anything less than the withdrawal of the three new farm laws by the Centre. To support protesting farmers, all the grain markets — including 152 main yards and around 1,700 sub-yards and mandis at the block and village level, will stay shut for three days till December 9 (Wednesday) as Arhtiyas and labourers working at these mandis will join the dharna at Delhi border. Apart from heavy police deployment at key border areas, Delhi Police will deploy personnel “outside offices of all political parties, the Agriculture Minister’s residence and Krishi Bhawan” to ensure law and order is maintained. On Monday, Delhi Chief Minister Arvind Kejriwal, along with his cabinet colleagues, met farmers at the Singhu border where he reviewed arrangements at the protest site. The AAP, along with 14 other opposition parties have extended support to the December 8 Bharat Bandh call by the farmers to protest against the three contentious ordinances.

Their needs are to be met and the government should take the situation seriously whole nation is in the support of the farmers. If no steps would be taken the situation could get worse. Farmers are the roots of the nation. As we say “Jay Jawan- Jay Kisan”. Here we are creating problems for the Kisan. The Jawans  and the Kisans are in opposite parties. One following the orders and other following the necessary steps for the betterment.