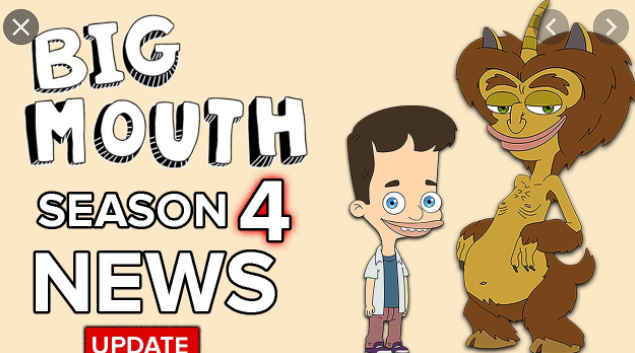 OTT platforms have now not just been offering web series, movies, documentaries but also cartoons to achieve viewers from each age groups.

Big Mouth is one of the most hilarious animated cartoon series with monsters as cartoon characters on Netflix. The big news however is that this saucy cartoon is now back with season 4 with new adventures, characters and voices.

Now we can see that the show is much more than just a hilarious kiddish cartoon show. It shows ideas like anxiety, depression, and shame as monsters. The show has some amazing cast members already and there are more to flow in in the upcoming season.

The show also has stars like John Mulaney, Jordan Peele, Jason Mantzoukas and many more with some new additions also. The series Big Mouth was inspired from South Park but now is definitely way beyond that parameter and now resolves all those major concerning issue with season3.

The show got delayed in its release because of the pandemic but the fans were surprised by its releasing in December that is two months after it was supposed to be released around 3a.m(midnight Pacific time).

There is of course a trailer for the fans to know what the season 4 holds for us. It starts at summer camp where it ended off in season 3 although there are hardly a few episodes of camp in the start of the series. Everything is in a topsy-turvy, there is all yelling, jumping around, running and shouting among characters with a new addition of a very unusual type of mosquito named Tito the Anxiety Mosquito which is dangerous and inevitable in nature. This new addition is another addition to the mix of already existing monsters in the series surpassing for human hormones like the Depression, Menopause, Shame.

New cast members and their roles and the further story.

This piece of cake certainly has a lot of cherries on top apart from Maria Bamford as Tito the anxiety mosquito and to help the characters beat the mosquito we have the Gratitoad played by Zach Galifianakis’ apart from these there are also guest stars like Seth Rogen (Seth Goldberg), Josie Totah, Lena Waithe, John Oliver (Harry the camp counsellor), Sterling K. Brown (Jessi’s new boyfriend Michael Angelo) and others.

We also find Missy the half-Jewish and half-black character’s evolution. She finds that she is attracted to both Nick and Andrew which apparently also drives a wedge between the two boys. Her character was played by Jenny slater who is white actor and did not want to play the character after the George Floyd incident when the entire industry took it upon their shoulders to give the black people the voice and recognition they so rightly deserve and thus wanted the character to be played by a black actor only to make the character more expressive and for the community to relate to.  Another dramatic change for the series is that Jessi’s mother decided that they were moving to New York City, leaving Missy with one less female friend.  There is expected to be a spin-off of the show named Human Resources and may others.

Share
Facebook
Twitter
Pinterest
WhatsApp
Previous articleSupreme court to set up committee to talk negotiations with the farmers.
Next articleDelhi all set to provide its prioritized section of people with vaccine doses when approved says CM.