HomeBusinessAmazon stands against Reliance and TATA group if makes an investment in...
Business

Amazon stands against Reliance and TATA group if makes an investment in Apollo Pharmacies. 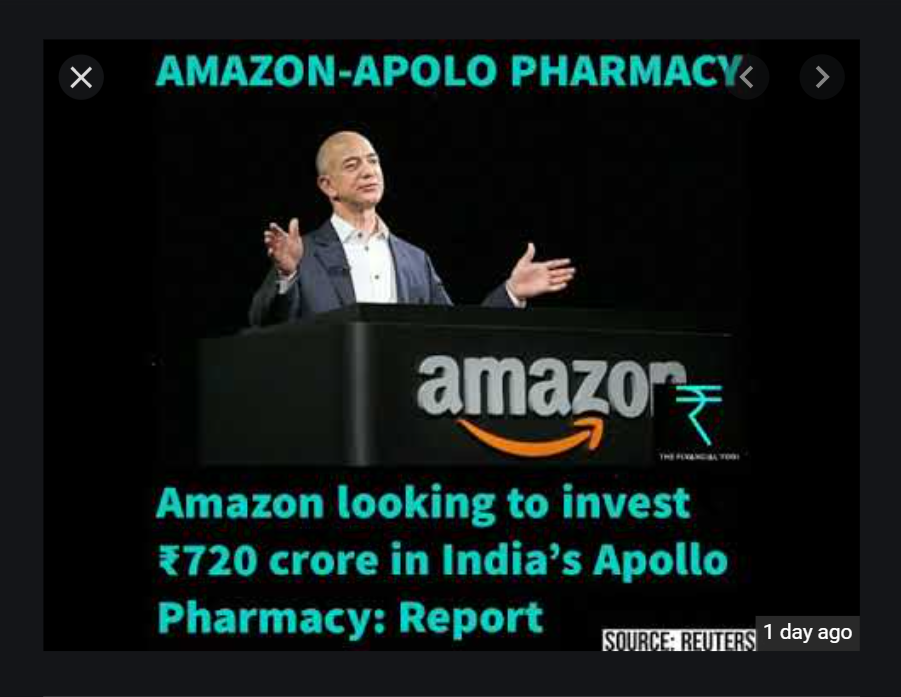 Amazon is one of the fastest growing companies today with its branches extended in almost every sector of business from apparels to footwear to groceries to pharmacy to electronics.

In the recent turn of event it was brought to light that amazon is on the verge of investing in India’s apollo pharmacy an investment of a 100million dollars which will give them access to apollo front end pharmacy business with over 3700 stores for hyperlocal delivery. Amazon has been a key player in investing in a lot of companies in various business sectors and also holds majority shares in those companies. There has been no statement made by apollo or amazon on the matter and these are the only two parties who know about the deal in details.

If amazon signs the deal with apollo that has around 3700 pharmacy stores and will also enter into a competition with Reliance industries and Tata group who each just recently acquired a certain e-pharmacy namely, Netmed and 1mg. Amazon has also launched online service for delivering prescription meds in the US. With apollo hospitals ready to deliver vaccine doses in the country the thought that comes to the mind is will it affect the deal if done with amazon. The 4 accounting and advisory firms involved in the happening of the deal has already concluded the process. The deal will give amazon the access to providing meds to its consumers by directly buying them from the retail stores. In relation to amazon entering the pharmacy market and standing in competition against the reliance industries they has invested rs47,265 crores in the war.

The striking point is not if the deal gets done or not but what shall happen of the people who are involved in these pharmacies the workers the people who own these shops and their jobs. The entire sector if goes online and there are prescription drugs that can be bought online as well these people will be unemployed. Another factor that can hamper the deal is that if the medicines that will be provided to the consumer will be well verified and trusted or not and what shall prove this. Apart from the fact that amazon already delivers medicines in India they are set for this deal to take place.